Business in the region is set for a good boost following the peace deal between the UAE, Israel and Bahrain as previous barriers to business are removed.

Last week the MSC Paris became one of the first cargo ships to travel between the two states and Israeli’s Prime Minister Benjamin Netanyahu called the shipment the “beginning of something huge”.
Initial estimates from Israel suggest trade with the UAE could eventually
reach $4 billion a year.
Mr bin Sulayem said in the interview that the pandemic has been “tough”for everyone in the logistics sector.
“All the shipping companies, port operators, logistics operators were shocked because of the lockdown and many of the procedures they [now] have to do,” he said.
In the first half of 2020, DP World handled 4% fewer shipping containers than the same period last year.
“We are not just affected by one part of the world, we are actually almost spread evenly around the world between the Far East and Europe to Latin America, Australia and Africa,” said Mr bin Sulayem. “We believe that by the end of the year we’ll be affected by less than 6%.” 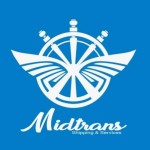